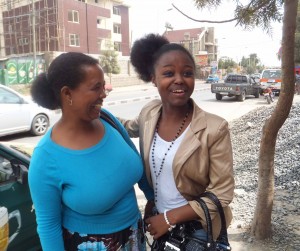 Betty and her mother after the Court hearing.

ADOPTION A Dutch adoption case, which looks like the two Danish cases has ended happily – at least for the girl Betty, who is now her real parents daughter again.

It could be the girl Masho from the movie ‘adoption come price’ or Amy from Mildura. The story similar to confusion about them: As a 7-year-old Betty Demoze was, with her little sister of 2 years old, adopted by a Dutch couple. But the adoption was based on a bunch of lies: Betty was older than 6 years, what was in the papers, and the children’s parents were not dead.

Like in the two Danish cases things went awry in the adoptive family – Betty missed her real parents and would not give in.

Just as Amy and Masho she was eventually placed outside the adoptive home, but before she managed to spend 2 years in the adoptive family.
Betty’s adoptive parents punished her by beating and kicking her, scolding her and refuse her meals.

At school she did fine, but her teachers had suspicions that all was not as it should be, at home, and eventually got the truth out of her. Her teacher, Louise, ended up becoming her foster mother.

Today Betty is in high school and doing fine. Now she is 14 years old and has just won a huge victory: A court in Ethiopia has revoked the adoption, so after Ethiopian law Betty is now again her mother’s and father’s daughter.

“I’m happy because they believed me and it means a lot to me,” said Betty Politiken over the phone from the Netherlands.

Together with her foster mother, Louise, she just landed from Addis Ababa, where she testified in the trial, that her biological parents has led on her behalf.

“As you can see, I am a child, and most people think more of adults than of a 14-year-old,” she says.

But the relationship with the adoptive parents is interrupted, and they refuse to let her see her sister.

“It is the hardest,” said Betty.
“They say I can not see her or talk to her, because I have problems, and it will hurt her. But it’s not true.
When we were together at the orphanage, I was the one that comforted her and made sure she had enough to eat and drink. And now I do not see her.”

Reunited with family
In Denmark, neither Amy of 13 or Masho of 9 are allowed to have direct contact with their biological family in Ethiopia.

The case Ombudsman is currently in the process of investigating. In the Netherlands, the authorities gave Betty green light to visit her biological family in Ethiopia 2 years ago – 5 years after she had come to the Netherlands.

It was a poignant reunion, first with father, mother and older brother, then the whole village, who received her with a huge celebration, with hugs and kisses and tears of joy.
Despite the fact that she had forgotten the language, she could remember plenty of experiences from his childhood.

“For me it was a huge relief, because I could only think of my real parents.
I knew they were alive, and I had never forgotten them – the only thing I wanted was to come home to them again with my little sister. Now I have decided to stay in the Netherlands, because I have more chance to get an education and be somebody. But perhaps I can later go to Ethiopia and work to help poor people, “she says.

Like with sending children to Denmark, Betty’s adoption was arranged by the Dutch adoption agency Wereldkinderen, which has refused to comment on the matter.

She and her sister came from an orphanage named Sele Enat, who also delivered a significant number of children to Danish families through mediation organization AC International Child Support (AC Børnehjælp) – one of the two Danish approved adoption agencies.
The second agency is DanAdopt which conveyed both Amy and Masho to Denmark.

AC International Child Support (AC Børnehjælp) Director, Margaret Primdahl, says she does not know about problems with cases from SELE ENAT.
“No, we have not had any warning lamps in relation to the organization. We have had a fairly long and good cooperation with SELE ENAT and have not experienced any problems, “she says.

Betty’s case and a handful of other problematic cases from Sele ENAT is described in the report ‘Fruits of Ethiopia’ on Ethiopian adoption industry.

The report was written by a European NGO Against Child Trafficking (ACT), which has subsequently assisted Betty and her biological parents with legal assistance in Ethiopia.
“This is the first time it happens that Ethiopian parents get right in their own country to revoke an adoption,” said Director of ACT Roelie Post.