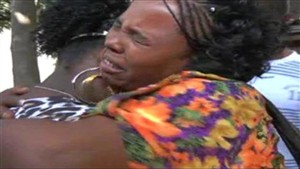 An overturned adoption in the Netherlands has given masho’s biological parents a taste. They will now have custody back.
By: Line Gertsen and Ditte Bannor Kristensen

The Danish authorities are in a historically new situation after two biological parents of two Danish children adopted from Ethiopia will now have restored the legal ties to their children. A Dutch girl got in February as the first its adoption overturned. DR News is the only Danish media that met the now 15 year old girl.

It’s only happened once before in Ethiopian history that an adoption has been annulled and that was when the then 14-year-old Betty Demoze in February stood in court in Addis Ababa and it was the court’s word that her adoption is no longer stood for believers.

She told the day after to ABC News about the experience of standing in front of the judge:
– He believed in me, and it is the biggest a human can experience.
In court, she explained that adoptive parents told her that she should not talk about Ethiopia and her new parents assumed that she could not remember anything about her biological parents, as they were saying to her was dead. And everything went wrong in the adoptive family. In court explained Betty, how she had been beaten and kicked by his adoptive parents.

In Betty’s adoption papers both her parents were stated dead, but it is not in accordance with the truth and it was what the then 7-year-old girl remembered. She was angry with her adoptive parents and everyday passed with one conflict after another. And this mechanism does not surprise Psychiatrist Birgit Petterson, who is the researcher who has researched most of the topic at home:
– It will indeed be a suspiciously child because the child feels that there is something wrong in this story. It can feel that something is wrong in the way it has been sent away and it becomes difficult for this child to make a proper connection.
A problem that is serious not only for children but also for adoptiv families:
– The adoptive families who have a child with this problem in their luggage gets it hard. It is a rogue and suspiciously child who certainly did not just fall some adoptive parents around the neck, and there are many who can not tolerate, and then you give the kids away.
Today we know that adopted children are four times as likely to be placed outside home – but it does not surprise psychiatrist Birgit Petterson:
– It is also a major task. It is not something to blame, it’s a much bigger task than they ever could have imagined.

Were living in Holland
As DR News meets Betty Demoze we show her one of the scenes from the movie adoption come price, which Masho calls for his mother:
– Poor girl, it’s like what happened with me. I hope she gets a chance to meet his Ethiopian parents again and thus may accept what has happened to her.

When Betty Demoze got its adoption overturned paved the way for a meeting with his biological parents. A meeting which today has resulted in the fact that she now has a close contact with them by phone, Skype and regular visits. But she has been living in Holland with his foster mother there to get an education.

She inspires others
In Denmark, the case of the adoptees girl Masho evolve into something resembling Betty Demozes history.
– I want custody back, said Hussein Imishu to ABC News last Friday.
He is the biological father of two children who are adopted to Denmark – one is the girl Masho who became famous because she starred in the film ‘adoption come price’ – a film that shows the associated difficulties which the then 7-year-old girl showed and consequences of it. This was strongly encouraged by the fact that in February managed a Dutch adopted girl getting her adoption annulled:
– We saw her case, and it is clear that it inspires us. We want the same to happen to our daughter, now she lives in an orphanage, says the couple.
– When she’s not living with his adoptive parents more and they have given her further, it must be such as it was – I want custody back, continues
Mashos biological father of BBC News and stresses that it does not necessarily mean that Masho be returned to Ethiopia – simply switch restored.
Mashos biological mother earlier to ABC News explained that the biological parents are afraid that it will be too difficult for Masho to return to Ethiopia:
– She does not speak the language, and we can not provide for her, as she has become accustomed to, but we want to switch back, she should know that we are here and we love her.

On Friday, ABC News could then tell that the biological parents have decided to engage a lawyer to raise a case that could end with the adoption of a Masho will be overturned.

At the Appeals Board’s website you can read more about the Danish rules for adoption.
See the full interview with Betty Demoze on DR1 in 21 Sunday