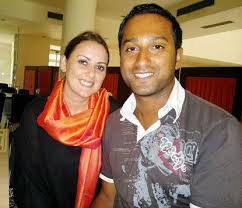 The first was German national Eva Dohle who met her mother a few years ago.

Martijn, 33, was adopted by Dutch couple Bertus and Lies Boerkamp in 1982. His search — since 2008 — for his roots met with little success until he met Arun Dohle, an India-born German who found his biological mother after 17 years of struggle and litigation. Arun is a researcher at Against Child Trafficking (ACT), a non-profit organization registered in the Netherlands which tracks inter-country adoption to document past and current practices.

Martijn’s meeting with his half-brother and half-sister was emotional. “Finally, I’m at peace. But I’m sad I couldn’t meet my mother,” he said. His mother, who had married another man, died in 2009 at the age of 50. ACT consultant Anjali Pawar, who did the ground work for the reunion, said: “First, I contacted his half-sister Namitha (name changed) who came to terms with the information and informed others which made my work easy.” Namitha said: “Though I was shocked at first at the revelation, I understood my mother’s position and accepted my brother wholeheartedly. What happened, happened — it cannot be undone.” Her brother Ranjith (name changed) said: “I was really happy to meet Martijn. I could understand the emotional upheavals he had gone through and his need to meet his family.” Martijn, a researcher at a university in the Netherlands, had come with his wife Nazaret for the reunion. She too understood his quest and was glad that Martijn could find his family.

On Tuesday, Martijn managed to trace his biological father who works in Mumbai. Anjali, who went through the records at Mt Rosary Charitable Institution, Moodabidri, said: “We traced Martijn’s biological father’s mother at Kadri based on records. The shocked woman said: ‘We thought it was a closed chapter’.” Anjali will meet the man in Mumbai on Wednesday and try to get him to meet Martijn. “He is hesitant, understandably so since he has a family and is quite well-known in the society. Martijn’s wants to meet him and bring some closure to this case.”