“I heard her story about how indescribably difficult a situation she experiences both now and then, ” said Annette Vilhelmsen .
Her ministry is currently in the process of reviewing the Danish adoption system. 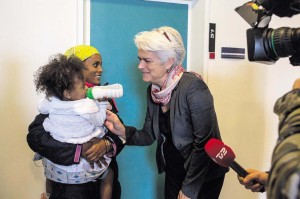 ” Genet Kedir’s experience and narrative is a story among many others, but it is important to get all the pieces included in the broad review of the area of adoption .
Both as a minister and as a human being, it  made an impression to hear the case from the biological family’s perspective , “she says .
Genet Kedir has spent some happy days with her eldest adopted daughter, Amy, who now lives with a foster family.
She has visited her school, saw her new home and family, and a daughter who is content and happy.

But the happiness is only half.
” The other half hurts, because I have not been allowed to meet my other daughter,” she say , referring to Amy’s little sister, who still lives with her adoptive parents.

“It hurts so much, it’s so hard to think about. Not even decent pictures of her I’ve got . ” It pains her, too , that her two children can not see each other – and that no power, neither Næstved or Denmark’s Social Security may change the adoptive parents’ decisions.

“It is puzzling to me that the government can just sit passively while the two sisters are apart . They have lost their mother and their country, and now they have also lost each other. It makes me unspeakably angry , “she says .
In a few days, she travels back home to the provincial town of Asela , where the situation remains the same for the other families who were enticed by the so-called child harvesters to submit their children to Danish adoptive parents.

“I’m the lucky one, for most mothers still do not have the luxury of hearing news about their children. Many reports still not arrive, or with blurred copied pictures, photocopies in black and white.
Everyone is very unhappy, and some do not even know whether their children are alive or not, “she says.

She says she was promised pictures and videos on a CD every three months.
After 5-6 years the adoptive family would come to Ethiopia with the children and visit her.
And when they turned 18, they could choose whether they would stay in Ethiopia or Denmark .
All these many promises helped to convince her and other families who were affected, among others by illnesses, that they chose the best for their children and that they would retain some connection.
“People want to give their children a chance for a better future. They feel they have no choice, “she says .

There is no agency or authority in Ethiopia, which helps families who have been fooled into giving up their children under false pretense, said gene Kedir. The mothers in her hometown heard nothing from the Danish authorities after the information about ‘ child harvesters ‘ came out. Therefore it pains her to hear that Denmark, after ten weeks of suspension, again retrieves adopted children from the African country, which already has close to the world record of foreign adoptions.

“My heart bleeds when I hear about it, because I know that nothing good comes out of it. It is better to be poor and be in one’s own country , “she believes.

Legal and social spokesman Pernille Skipper [Parliament], also had a meeting with Genet Kedir and heard her story ‘ from the her mouth , “she says :
“It is so terrible and confirms to me that we are dealing with a systematic error. How you can afford an adoption on the wrong terms and with such different perceptions between her and the Danish authorities , “said Pernille Skipper.

Only in Denmark the adoption necomes closed and anonymous, and any ties to the original parents cut. Despite this difference, as the Ethiopian parents do not know, the Danish authorities have declared that the adoption of Genet’s children as well as children from the movie ‘Mercy Mercy ‘ is legal , but if Genet Kedir’s story is true and complete, these adoptions are illegal, says Pernille Skipper .
She feels bad that adoptions from Ethiopia were resumed.

“We are not sufficiently confident that in adoptions it is true that children’s rights are respected and that the biological parents are not cheated,” she says .