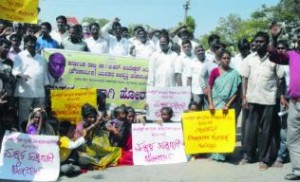 Mysore: Guardians of eight year old Ullas and seven year old Anand, who are all set to be given up for adoption to an Italian couple without their consent, protested in front of the Gandhi statue near the court here on Friday joined by hundreds of Dalit activists and several relatives.

Asked why they were against the children being adopted, when they seemed willing to go, their uncle Nataraj said, “We may be poor, but we are not heartless enough to let go of our sister’s children altogether. Adoption would end our relationship with them and we don’t want that to happen. The children themselves are too small to judge the situation.”

Claiming they had met a child placed in the custody of the Child Welfare Committee, Mysore, who was adopted by a couple in Mandya, but did not like staying with them, he said, “Luckily the girl was in Mandya and so could come back. We are seeing so much of injustice taking place right before our eyes. Why should we then send our children to Italy?”

The protestors urged the Mysore district administration and the CWC, Mysore in a memorandum to immediately remove the children from the care of the Vatsalya Charitable Trust in Bengaluru, and put them in a good institution in Mysore in accordance with former Mysore Deputy Commissioner, Manivannan’s order in 2008.

“We would like to see the children remain safe and well till they complete 18 years of age,” they pleaded.

Anand and Ullas were orphaned five years ago after their mother was gangraped and murdered and their father committed suicide. The two were put in care of a home in Mysore by CWC but were later shifted to the VCT without their guardian’s knowledge. —S.P.