Heart-rending story of parents seeking to get back children snatched from them and then sent for adoption abroad.
Shaikh Azizur Rahman
06 Nov 2013 11:29 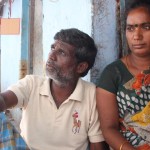 Nagarani, right, and her husband Kathirvel, had their son stolen in 1999 [Shaikh Azizur Rahman /Al Jazeera]
Deep furrows line her forehead as Nagarani, a resident of a Chennai slum in southern India, lives a life of despair.

For 14 years now, she had been trying to get back her son – stolen and then sent for adoption abroad – without any luck.

“Long years have gone by. It seems we are losing our fight. I doubt if I shall ever get back my son,” she says in between uncontrollable sobs, squatting in her tin-roofed ramshackle shack.

Nagarani’s frustrating quest is shared by many other Indian parents, whose children were stolen by child traffickers and then sold into adoption in foreign countries.

According to figures from India’s National Crime Records Bureau (NCRB), one child goes missing in the country every eight minutes and forty per cent of these children are never found.

Last year, India’s minister of state for home affairs said in the parliament’s upper house that 60,000 children had been reported missing in the country in 2011.

According to Rakesh Senger, a researcher with the Indian child-rights NGO, BachpanBachaoAndolan, only half of the cases of missing children are reported to the NCRB.

“A good number of the lost children end up as prostitutes and bonded labourers or joins the homeless population in big cities,” Senger told Al Jazeera.

“Some of the missing children land in orphanages, and a percentage of those reach their adoptive families in India and abroad.”

Nagarani’s poignant tale is illustrative of the tragedy that has befallen many others in India.

Wife of a daily wage labourer, she and her children were sleeping outdoors one night to beat the oppressive summer heat. When she woke up, she found that one of her sons, Sathish, was missing.

For years, her search yielded nothing, until the police busted a child trafficking network in south India in 2005.

The traffickers confessed that they had secretly passed on several children, Sathish included, to a Chennai-based orphanage with a licence to offer children for adoption abroad.

Long years have gone by. It seems we are losing our fight. I doubt if I shall ever get back my son

Investigations into the racket unearthed sordid details: the orphanage had sent at least 350 children for adoption abroad, having fudged the identities of some 100 of them.

The case kicked up a furore and the Central Bureau of Investigation (CBI) – the country’s highest investigating agency – stepped in to probe deeper. It was soon revealed that the orphanage had recorded Sathish under a false name, Anbu. According to their records, Anbu had been “abandoned by his unwed mother Miss K Mala”.

Two other stolen children – Zabeen and Subash – also had their identities changed by the orphanage. They were renamed as Suji and Ashraf and sent for adoption abroad.

From the office of the orphanage, police recovered photos of scores of stolen children. Nagarani spotted one of them as her missing child – sent for adoption in the Netherlands.

The boy has been tracked down since then – he is living with his adoptive parents under a new name. But Nagarani has not succeeded in getting any closer to him.

No to DNA test

She raised money and visited the Netherlands twice in an attempt to prove that she was Sathish’s biological mother. But his adoptive parents – who had paid $35,000 to the orphanage for the adoption – refused to subject him to a DNA test.

Dutch courts have refused to come to the rescue – ruling that a plea for DNA testing risked inflicting severe emotional trauma to the minor.

Against Child Trafficking (ACT), a Netherlands-based NGO, is now fighting Nagarani’s cause.

“All legal remedies having been exhausted in this case in the Netherlands, we have now filed a suit against the Dutch government in the European Court of Human Rights,” ACT activist ArunDohle told Al Jazeera.

By all accounts, the adoptive parents were not complicit in any crime. They were simply unaware of the background of the child. 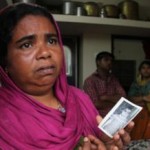 Fathima says her stolen daughter has been adopted by a family in Australia [Shaikh Azizur Rahman /Al Jazeera]
But it is of little solace for mothers like Nagarani.

“What has been exposed is only the tip of the iceberg,” says Chennai’s former police chief, R Natraj.

There are more than 11.5 million abandoned children in India and its adoption authorities regularly urge western countries to adopt children from country’s hundreds of orphanages. According to India’s Central Adoption Resource Authority (CARA) about 1,000 Indian children go for adoption abroad with bulk of them going to the US.

According to CARA guidelines a foreign couple adopting an Indian child should not pay more than $3500 in donation to the Indian orphanage. However, in reality, foreign parents often are forced to pay up to ten or twelve times more money to an Indian agency, making the “adoption business” very lucrative in India.

But the likes of Nagarani have lost out badly as the adoption business flourishes.

So has Fathima, the mother of Zabeen, who has found a new home in Australia after being stolen.

“I have information that my daughter is growing as an adopted daughter in an Australian family in Queensland. Her skin or hair colour must be different from those of her adoptive parents.

“My heart tells me, one day she will start searching for her birth parents and we will reunite,” Fathima told Al Jazeera. She has not run out of patience yet, despite the wait being painful.