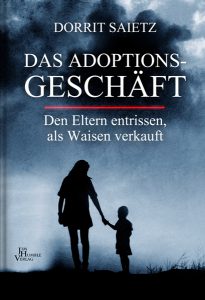 Is it love or human trafficking when childless Danes with a heart full of hope and expectation travel and bring a child “home” from Africa, China or India? Do they think about whether the child they consider their own, in fact, has a family, from which is separated from forever?

Recent years have brought numerous revelations on the Danish and international adoption system, how far is everything as it seems, on the nice surface.

Adoption is namely also a competitive market, where demand drives supply and large amounts of money changing hands. Where children are separated from their parents on the basis of lies and half-truths. And some of the children who had to have a new life and a new chance in a new country, end up being the victims.

This book takes the reader on a journey through the landscape, as adoption become battlefields. Here wages a global war on access to the small, healthy children, as affluent Western adopters demand.

The battle waves in Mumbai’s slums and villages in the Ethiopian highlands, the EU Commission offices in Brussels and Congress in Washington. And the swell spreads – also to Denmark, where more and more adoptees adopted as adults find that their adoption and throughout the story they grew up with, is based on lies.

Adoption in many cases developed into an attack on fundamental human rights, which also Danish authorities helps and supports with millions of tax money. The question is whether we should continue to adopt children from abroad to Denmark? Or if it would be better to help children and their families in the countries the children come from?

Dorrit Saietz (b. 1959) is a journalist with the newspaper Politiken and has for several years writing about adoptions.