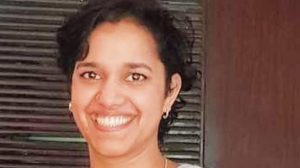 Matilda was adopted by a Swedish couple form Delhi orphanage when she was 7.
She received abuse and negligence from her parents in Sweden.
After staying in foster care, she is back in India to find her real parents.

Matilda Gustafsson, who was adopted by a Swedish couple when she was seven years old, has returned to India to find her biological parents. Matilda says her adoptive parents turned abusive and she was shifted to a foster home.
Matilda Gustafsson, named Shobha at birth, was given up for adoption at the age of seven to a childless Swedish couple by a Delhi orphanage. But Matilda’s joy of being part of a family was cut short once her parents turned abusive and negligent. She was once again forced to live in foster care.

Having gone through a traumatic experience, Matilda, now all of 23, has decided to trace back her adoption journey in India and find her biological parents. She, along with Arun Dohle and Anjali Pawar from Against Child Trafficking (ACT), has set out on a journey to find her roots and how she landed at the orphanage home.

During her stay in Delhi, she recalled playing with fountain at India Gate and eating bhelpuri and paan. She has vague memories of shining people’s shoes on the streets. Anjali Pawar told MAIL TODAY that Matilda was brought to the orphanage home by Madangir Police Station in 1999.

“Matilda’s adoption documents do not speak of her past or biological parents. There is no record of the circumstances in which she was found. Her records are not available with the police. We do not know if she was abandoned by her parents or went missing,” she said.

Matilda’s case highlights the lapses in the inter-country adoption system just in the case of three-year-old Sherin Matthew, who was adopted by a couple in Texas from India but was found dead two weeks after she was reported missing.

Her adoptive parents have been indicted by the court for her murder and for being negligent towards her. The experts feel that children who may have gone missing are also sometimes given up for adoption when the parents of the missing child may still be looking for him/her.

“I remember being excited when the orphanage caretaker told me I will have my own family. My adoptive parents sent me gifts frequently. But things changed three years after moving to Sweden,” Matilda told MAIL TODAY. “My mother was diagnosed with bi-polar disorder and tried to take her life twice. With her failing health, my father grew distant. He also had temperament issues. I started performing poorly in school. I was diagnosed with dyslexia and never received the right help. My father was extremely abusive towards my mother. Even at school, I was bullied and made fun of for my colour,” she added.

A childhood picture of Matilda Gustafsson
Matilda mostly lived on noodles as there was no one to make food and felt that her parents did not like her. As years passed, her situation left her school worried. They facilitated her meeting with a social worker who suggested that she be put in a foster care home.

“When I told my father I want to go to a foster care, he did not say anything. I am glad to have found a good foster home,” she said.

Biometric registration of missing children and orphans is one way suggested by experts to keep a track of their whereabouts. Sherin’s case has thickened India’s intercountry adoption process but the child rights activists believe that there is long way to go.

Speaking to MAIL TODAY, Anant Kumar Asthana, advocate and child rights activist, said, “Once children go out of Indian jurisdiction in inter-country adoptions, they lose their agency and there is nothing India can do for them if they meet an undesired fate. Many who come back after becoming adults in search of their biological parents often find the system not cooperative enough.”

“Government should improve international cooperation on inter-country child adoption to ensure that rights of such children are kept intact and they do not land without a support system. Secondly, the focus should be on preserving records of the children given into adoption for at least 60 years. Most often no records of such children are found when they come back to search for their families,” Asthana said.