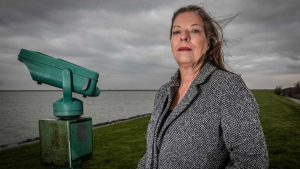 AMSTERDAM – Whistleblowers must feel safe, politicians emphasize time and time again. However, in practice, isolation and fear often threaten. Roelie Post exposed the international ‘Adoptive Mafia’ and paid a high personal price.
She is not in hiding, but where she stays exactly in the Netherlands, Roelie Post (59) does not make public. The former official at the European Commission still does not feel safe after she was threatened because of her revelations about the activities of an international operating ‘Adoption Mafia’.

During research in Romania for her employer in Brussels, Post stumbled across a network of child traffickers: “From children who were offered for adoption, it appeared that the parents were still alive and had no idea what happened to their offspring. It’s just organized crime. ”

Post helped to solve abuses in Romanian children’s homes so that the country could join the European Union. She followed traces to the (possible) trade in organs of children and to international pedophile networks, where adopted children would disappear. She wrote a book and collaborated on documentaries – including Netflix (episode 6), the German public broadcaster (see below) and the Dutch Argos – about abuses in the adoption industry.

In doing so, she made more and more powerful enemies. “An influential French banker, François de Combret, who is now suspect in a corruption scandal, opposed the cessation of adoption from Romania. Combret, who has good contacts in Brussels, clearly had an interest in the continued existence of that child trafficking. ”

Post was initially supported by her superiors. She was even commissioned by the then European Commissioner Günter Verheugen to report directly to him, in view of the sensitivity of the file. However, the staff at the top changed and her executives started to see Roelie Post increasingly as a nuisance. She was given the opportunity to lead her own organization, which traced abuses in the countries of adoption. But when Post returned to the Commission in 2014, the influence of the pro-adoption lobby grew, and she was no longer welcome. “I was completely ignored and did not get a suitable job.”

In 2015 she made a rigorous decision. “I closed the door behind me and walked away.” Meanwhile, the threats – she suspected from the corner of the ‘Adoption Mafia’ had increased. “I have been chased, my car has been stolen, I have been burgled, and there was a toy gun at my door.” She appealed to the European whistle-blower’s order for officials who denounce abuses and are being thwarted. “But they refuse in Brussels to give me that status.”

Last summer, Roelie Post was fired, despite insurance from Frans Timmermans, vice-president of the European Commission, that whistleblowers should enjoy special protection. Post, who has worked for the Commission since 1983, has since then lived in a temporary shelter, without income, without the right to unemployment benefit, uncertain about the future.

A number of MEPs are committed to rehabilitation, including SP’er Dennis de Jong (63). “Roelie has violated the rules by walking away,” the SP’er acknowledges. “But she was exhausted and anxious because of that labor dispute and the threats. If you, like Timmermans, talk impassively about the protection of whistleblowers and you deal like that with someone like Roelie, then you have something to explain. ”

Posts ex-employer demands repayment of two years salaries for the period that she was absent from work: 170,000 euros. De Jong will shortly speak to the Secretary-General of the European Commission, who is responsible for personnel matters. “I hope that this amount will be canceled and that Roelie will get a good arrangement until her retirement.”

The EP member does not want to talk about the other, highly explosive side of this file – international child and possibly organ trade. “I cannot say anything about that. However, Roelie and others have brought to light many things could be wrong with international adoptions and that children also end up in pedophile networks. But it is up to organizations like Interpol to play a role in this. The new European Parliament, which will be elected in May, should address the issue. ”

Part of what Roelie Post has exposed is now generally recognized: a large number of prospective parents – particularly in the United States – is in favor of increasing the supply of adoptable children in poor countries. Post: “It is a thoroughly corrupt business. With the trade in children, big money is earned. ”

At first, she did not believe the stories about the excesses either. “Until a Romanian state secretary explained to me how things are going. With adoption, a child gets a completely new identity. So you have a child A. That goes to the Netherlands and gets the name B. All papers are in order. But there is another child – C – that is going to disappear. That child is also registered under the name B. There are therefore two Bs, one of which disappears. Nobody knows where the last children are going and what happens to them. ”