Free Romania studied the two Conventions before addressing the officials of the European Commission, the difference is huge, the two being absolutely “incompatible” from two essential elements:

a) The United Nations Convention excludes the “international adoption” variant, being almost impossible to approve adoptions even outside the Member State where the child lives. Article 21: (b) States recognize that international adoption may be considered as an alternative means of child care, if the child cannot be placed in an adoptive family or foster care (Foster) or cannot be cared for in any appropriate way in the country of origin of the child; The best interests of the child are thus defined. According to this article, Sorina’s adoption is illegal, the girl can never be taken from the family of foster parents.

b) The Hague Convention is for the child’s interest in having a family, a guide adopted in 2013 about “Cooperation on cross-border adoption / introduction:” The Convention recognises that growing up in a family is of paramount importance and is essential for the happiness and healthy development of the child. – The Hague Convention is practically in line with Article 21 (b) mentioned above, not permitted by the United Nations Convention and, as will be revealed below, confirmed by a wikileaks cable.

a)  The United Nations Convention  defines intermediation with the payment of adoption agencies as trafficking in children. “Protocol signed and ratified by resolution A / RES / 54/263 of 25 May 2000 with effect on 18 January 2002: Article 2: (a)“Sale of children” means any act or operation by which a child is transferred by any person or group of persons to another in exchange for remuneration or any other benefit.”

B)   The Hague Convention is completely the opposed : Payment of to private bodies, article 32: (2) Only costs and expenses, including reasonable professional fees of the persons involved in adoption, may be charged or paid
(3) The directors, administrators and employees of the bodies involved in an adoption shall not receive remuneration which is unreasonably high in relation to the services provided

Romania has defrauded the European Commission, ignoring the possible consequences and giving the coup in the Ciolos Government (2015-2016)

In 2012, a second time this happened with the support and participation of the same people, Margarete Tuite, European coordinator for children’s rights, who
in 2013, in a “humiliating” interview, admitted that she was the one who deleted the United Nations Convention but immediately repaired the mistake. 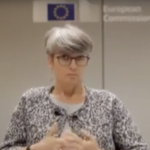 The Cable published by Wikileaks between the State Department and the European Commission, June 4, 2010, confirming the United Nations Convention.

here in the original wikileaks version

Thank you for your letter of 4 May 2004 on the issue of intercountry adoptions from Romania.

I would like to clarify that the European Commission is not against intercountry adoption as such. However, the UN Convention on the Rights of the Child foresees that inter-country adoption may be considered only if the child cannot be placed in a foster or an adoptive family or cannot in any suitable manner be cared for in the child’s country of origin. This “last resort” provision is consonant with the provision in the UN convention that refers to the “desirability of continuity in a child’s upbringing and to the child’s ethnic, religious, cultural and linguistic background.”

All Member States of the EU have ratified the UN Convention on the Rights of the Child and therefore should respect the above-mentioned principles. Therefore the Commission considers that the moratorium on intercountry adoptions is necessary as long as no legislation is in force that fully complies with this convention, and as long as no administrative capacity exists to implement this legislation.

It is shown in the letter sent by the Commissioner for Enlargement, Gunter Verheugen, on June 4, 2004.

He further states that: Our primordial focus must be on getting the system of childcare in Romania right so that we get tot he usual situation in the Member States of the EU where international adoptions are the exception. Therefore, the EU has supported Romania in its efforts to improve the quality of public care for children. This meant that large residential establishments were closed down and replaced with a selection of child protection alternatives ranging from smaller homes and foster care to day-care centres. Of course there remains work to be done, but Romania surely has come a long way in resolving the issue of children in public care.