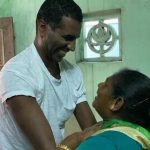 Dogged, transcontinental quest ends in sweet reunion.
A cup of mother’s sweet kesari and hot coffee is joy. For David Kildendal Nielsen, it was special. He was reunited with his biological mother at her house in Manali, Chennai, on Saturday after a staggering 40 years.

Mr. Nielsen, who lives in Denmark and was originally named Shantakumar, was born on January 25, 1978, to Dhanalakshmi and Kaliamoorthy of Washermanpet. After her husband deserted her, Ms. Dhanalakshmi and her two children — Mr. Nielsen and his brother Manuel Rajan — took refuge at a charitable home in Pallavaram in November that year.

Loses contact
However, Ms. Dhanalakshmi was asked to vacate after a year, as the orphanage claimed her presence was making other children homesick. She would then visit her children often. But one day they were gone. The management told her that they were sent abroad so that they could lead a better life. She did not know that they had been given in adoption. After some months, her husband returned, and the couple had a third child.

“This time Dhanalakshmi did not allow him to hand over the child to anyone. But the husband went missing again,” said Anjali Pawar from Netherlands-based NGO Against Child Trafficking, who along with her colleague Arun Dohle helped Mr. Nielsen trace his mother.

It was only in February 2013 that Mr. Nielsen came across documents and found he had a brother named Manuel Rajan, who was also given in adoption in Denmark.

“He traced him and took a DNA test, which confirmed they were siblings,” Ms. Pawar said.

Overcome by a desire to find his biological parents, he launched a search in Chennai. Articles about him in the media caught the eye of the wife and daughter of the pastor at the Pallavaram orphanage and they sent him a picture of Ms. Dhanalakshmi.

Armed with the old picture, Mr. Nielsen kept looking. He put up posters, hoping that his mother would see them.

TV programme helps
The breakthrough came when Ms. Dhanalakshmi’s relatives saw a television programme on Mr. Nielsen’s quest a few weeks ago, and contacted him. Soon, mother and son spoke on a video call.

“When I met her on Saturday, she hugged me. My joy knew no bounds. The only problem was the language barrier,” said Mr. Nielsen. He presented her an album with his photographs from childhood. “I wanted her to know about every stage of my life,” he said.

Mr. Nielsen is sure that Ms. Dhanalakshmi is his mother, although a DNA test is being done to confirm it.