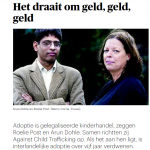 Set up in 2008 by Roelie Post and Arun Dohle, at the behest of the European Commission, we claimed that intercountry adoption was a legalized form of child trafficking and that we wished it to be over in five years.

ACT rapidly became the heart of knowledge of the adoption system. Combining Roelie’s knowledge with the policy-making and Arun’s experience in field research, we proofed unbeatably.

Wherever things went wrong, ACT was around: Romania, Bulgaria, Ethiopia, Malawi, Congo, Uganda, South Africa, Serbia, Montenegro… We networked, connected the dots, informed the media, and the authorities. It did not make us popular with those involved in the adoption industry, but so be it. 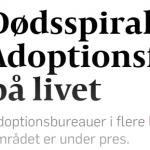 Just four years later, in 2013, the Danish newspaper Politiken published another interview with the title “Deathly Spiral: Adoption agencies are threatened with death“.

And now, end 2019, both the Dutch and the Danish government don’t know how to continue the current intercountry adoption system. Policy evaluations, new scenarios, discussions in Parliament. And then there are the adoptees. Organized and with a loud voice they request justice and support in finding back their roots/family.

The powers that be are stepping out of the dark during this process. The adoption agencies and their allies, adoptive parents. But most of all, the international forces from organizations like International Social Services. This NGO set up after WW I to enable migration to the US, has been heavily involved in setting up the current system, and now again enters the adoption arena. Both in Denmark and The Netherlands.

But also at EU level. Last year ACT’s  Arun Dohle and European Commission whistle-blower Roelie Post were speakers at the European Parliament Intergroup on Integrity, Transparency, Corruption and Organised Crime, hosted by MEPs Ana Gomes and Dennis de Jong: Documentary film screening and debating THE TRAFFICKERS, the Dark Side of Adoption. The room was full of MEPs, their assistants, and many adoptees from all over the EU. And, the Director of International Social Services’ Headquarters in Geneva – Mia Dambach who even tried to shorten Arun Dohle’s speech. Without success though.

One needs to know, that also during the Romania time, when the EU requested Romania to stop the export of children, ISS/DCI/Unicef – in the person of Nigel Cantwell – stood diametrically opposed to the EU’s view on children’s rights.

The two positions can be summarized as:

UN Convention on the Rights of the Child v. The Hague Adoption Convention,
or
EU v. US

ACT will continue to promote the full implementation of the UN Convention on the Rights of the Child. To be clear, we consider the battle fought and won. The UNCRC can not be replaced with the Hague Adoption Convention. We made that abundantly clear.
Mission Accomplished.

For more details and understanding, watch the below video. Merry Christmas!