Part I  International Social Service, little did I know

Little did I know, but bit by bit I got to know more:

Around 2002/2003 child trafficking for intercountry adoption got uncovered in Andhra Pradesh (India). One of the human rights defenders involved in this entered into a direct online dialogue with a group of (prospective} adoptive parents. She wanted to build a bridge and to show what really happens on the ground in contrast to what is being told by adoption agencies. I was part of that e-group too.

The orphanage was run by Sister Theresa Maria Katticaren from the Dutch JMJ Congregation.

Sister Theresa and others were in 2003 convicted for conspiring to procure children for intercountry adoption, to falsify relinquishment documents, and to ask for huge money.
And to not offer the children first for domestic adoption.
Child trafficking, in other words. 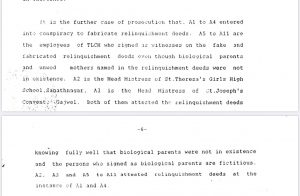 I quickly figured out that the German branch of International Social Service mediated at least 15 children from there.

The network was as follows. An Indian translator in Germany, Ms. Suri, had adopted from Sister Theresa and then helped others to adopt from there too. She did the whole mediation, but formally – as the use of an adoption agency is obligatory – the paperwork went through the German branch of ISS.

A little later, I figured out that there were still children in the pipeline.  ISS Germany had not formally pulled out of these adoptions. Neither had the Dutch agency Wereldkinderen (N.I.C.W.O), who also mediated from this ‘orphanage’.

I had long discussions with the director of ISS Germany. It took more than a year of talking before they pulled out of these adoptions.

One my first search cases was that of a German adoptee, Anisha.
The documentary speaks for itself: Anisha was stolen….
As does the reaction of ISS: outright denial.

We are still in contact with Fatima, the mother, and help her when needed.