When in 2011/2012 the filming of Stolen Children – Intercountry Adoptions from India was ongoing in ACT’s office in Brussels, I got drawn into the details of the German/Indian trafficking case.

Arun was talking in German with the journalist, explaining to her the involvement of the German branch of International Social Services. Internationale Sozialdienst Deutscher Zweig, he called it.

Wait, where did I see that name before?

A quick look into my archives brought me to a Petition Kreuz 1999 handed in in 1999 at the European Parliament by a German citizen, a certain Gunther Kreutz.

In short, the Petitioner asked the European Parliament to allocate 5 million euros per direct agreement to the Romanian NGO Parenti si Copii (Parents and Children). That NGO was the Romanian counterpart of the German branch of ISS. The 5 million euro was meant to provide urgent humanitarian aid for the children in Romanian residential care.

It was the first time on the Romania job that I had to go to the European Parliament’s Petition Committee. My boss and I explained the Children Programme and the way it worked. There would be a tender procedure and no direct agreement. We also explained how the European Commission was dealing with the huge crises in child protection. Several Members of the European Parliament asked us questions. It was all very emotional, passionate.

In June 2001 Letter June 2001 that the Petition had received a lot of interest, that it still would be kept open, and that the Petition Committee had taken the unusual step to thank the European Commission for their endless engagement to improve the situation of the Romanian children.

So far, so good. As an official of the European Commission, it is always tricky to find your file in the attention of the European Parliament. They can make your life difficult. But hey, we were thanked!

Only later I realised that Mr. Kreutz’ Petition was an attempt to get points for adoptions – the Romanian 1997 law had created a point-system, the number of adoptable children was dependent on points which adoption agencies could get for delivering humanitarian aid, or by giving money.

If the European Commission would have given the 5 million to Parenti si Copii, then this adoption agency would have gotten a large share of Romania’s ‘adoptable’ children. Once we realised this, measures were taken to ensure that no EU funding would go to adoption agencies. We realised there needed, in general, to be a firewall between child protection and intercountry adoption agencies. Otherwise, it would be like the fox guarding the henhouse…

Extract from my book Romania for Export Only, the untold story of the Romanian ‘orphans’

Going through the correspondence I had to reply to, I saw German families were now writing to Commissioner Verheugen. Never before had we received mail from Germans. Before 2001 Germans had adopted only a handful of children from Romania. According to Teodorescu’s 2002 report Germany had obtained one exception to the moratorium and five families were registered as prospective adopters.
Now over twenty German families had been told there was a child available for them and they had been called to Romania first week of the year. They had paid 8,000 euros as advance, half of the final costs. After they came back from Romania in January, they received a letter from their German adoption agency saying no more adoptions were allowed, no more exceptions. The adopters were told to write to Commissioner Verheugen. Pressure on Verheugen?

Going through the letters I found out that the German agencies were indeed trying to break the moratorium. They had proposed children to German families during the moratorium!

The German branch of ISS had stopped its adoption activities from Romania. I don’t know exactly why. Two small German adoption agencies took over their adoption work with Parenti si Copii: the agencies Zukunft fur Kinder and Children and Parents (CAP).

Interesting detail: the chair of CAP was Gunther Kreutz, his wife Marika his deputy.

With their letter campaign, the German agencies now wanted to convince German Commissioner Gunter Verheugen of the need to get adoptions re-opened. Prospective adoptive parents were also asked to write letters in order to put pressure. 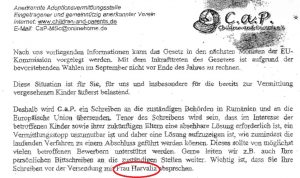 Anyways, having analysed the matter, my bosses told me to draft a letter. The Romanian authorities needed to be informed about this. Link to full letter Annex Ref GestDem 2020 0500 (2)

The adoptions did not proceed. The new Romanian law voted in June 2004, would no longer allow adoptions by unrelated foreigners. The shop closed.
But the story wasn’t over.

Many years later I realised the powers at work. My many talks with Arun helped me to understand the German system.
Intrigued by the fact that a German citizen who hands in a Petition at the European Parliament, knowing apparently all procedures, Arun called the family Kreutz some years ago. Marika Kreutz told him that someone in the Cabinet of Martin Schulz had told her how to do it. No, she and her husband did not know Martin Schulz herself. Which is a bit hard to believe. They live in the same town, where Martin Schulz was mayor, and are members of the same political party…

We also found out that Oana Harvalia got married to a German politician: Gunter Krichbaum.
Gunther Krichbaum is the chair of the Committee on European Union Affairs of the German Bundestag since 2007

Mr. Krichbaum is close buddies with Günther Oettinger, who was the German European Commissioner for Human Resources when I got fired and ended up with debts.

In February 2016, in accordance with the Whistle-blower Guidelines, I handed in my whistleblower letter at the Cabinet of the President of the European Parliament: Martin Schulz

More will follow on the European House of Cards… or should I say House of Horror?