In 1973 I was adopted from India to Germany, like many of you who may read this. My views on adoption were bottom-line quite positive, just as my view on organisations involved in this, like International Social Service (ISS). Little did I know…

In 1999 I got my first access to the Internet and started searching. The Internet provided the first chance to get some information. Still little did I know…

In the coming weeks we will share bits and pieces about the involvement of ISS in intercountry adoptions, including their direct or indirect complicity in the trafficking of children for adoption.

I fully understand that this may be hard to believe. I could not imagine myself for many years. I thought ISS is the expert organisation who ensures ethical and legal adoptions, understands adoptees’ and children´s needs, as well as their rights.
Little did I know that ISS is not on our side.

After two decades of researching and digging into the underbelly of intercountry adoptions, I know more today. Yet it is still just a little.

I will start with explaining how exactly ISS was involved in my own adoption, and how they failed me. This may well be exemplary for many adoptions from India, and in particular for most adoptions from Maharashtra.

Due to various adoption scandals in India adoptions had been regulated. It was the Indian correspondent of ISS, the International Council of Social Welfare (ICSW) who advised, since 1972, the Indian Courts in each and every adoption case. They served as ‘clearing house’.[1]

In my case that meant that ICSW, the Indian correspondent of ISS, advised the Indian Court that my adoption was in my best interest.

The below letter, which I got during my search, states clearly that they did not check if the obligatory relinquishment document, also called surrender document, was on file. 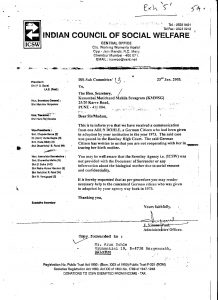 When, after 7 years litigation, in 2010 I finally got access to my adoption file, a relinquishment document appeared not to be on file with the orphanage.

My mother never consented to an intercountry adoption, or to changing my name and identity.  I was adopted without consent of my mother.

In my adoption no agency was involved. My adoptive parents were on a visit in India, and did not really know how to get things done. So, who did they ask for advice? The experts: ISS.

ISS was also somewhat involved in my adoption at the German side, because they gave my adoptive parents advice on how to do the legal part.

Being involved in an adoption where there is no consent of the mother is bad enough. It is something which cannot be changed anymore, and which we adoptees in the end just have to accept.

But what did this missing “surrender deed” mean for my search? It meant that it was next to impossible to find the address and full details of my mother. This is the same for many adoptees from India.

In 2002, when I started searching, I didn´t understand anything much.  I only knew that ISS was assisting adoptees with searches. So I registered and paid ISS to work on my search case.

I never got feedback on what exactly was done. Or if something had been done at all. I only was told how difficult things were etc.

So first ISS allowed the erasure of my original identity, without a surrender deed of my mother, and then essentially put me down in my own search.

In the next chapter I will explain how ISS was involved in outright trafficking of children from India.

[1] Rule 316‐B: “ when a foreigner makes an application for being appointed as the guardian of the person of property of a minor, the Prothonotary and Senior Master shall address a letter to the Secretary of the Indian Council of Social Welfare, informing him of the presentation of the application and the date fixed for the hearing thereof. He shall also inform him that any representation which the Indian Council of Social Welfare may make in the matter would be considered by the Court before passing the order on the application”