More precisely, the Orban Government has on the agenda of Monday’s meeting a DRAFT DECISION on the recognition of the “SERA ROMÂNIA” Foundation as being of public utility .

Earlier this year, a draft Government decision was posted on the website of the Ministry of Labor, led by Violeta Alexandru, and the draft was under public debate until February 12, 2020. 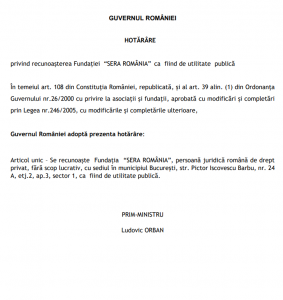 The presacurata.ro website wrote, at that time, that the SERA Foundation (Solidarity with Abandoned Romanian Children) was founded in the 90s by the banker Francois Polge de Combret, investigated by several authorities in a huge corruption scandal, the Frenchman from Combret being over time extremely interested in orphaned children in Romania and lobbying very strongly in Brussels.

The SERA Foundation (Solidarity with Abandoned Romanian Children) also appears in a documentary broadcast in 2009, on the German television WDR, “Find me a child, I pay cash. Lobby for international adoptions ”, which presents the pressures made on European officials for the resumption of international adoptions by Romania and was even accused of financing, together with American universities, the“ Adoption Project ”program, held at the St. Catherine Center in Bucharest, through which scientific experiments were performed on orphaned Romanian children.

Also in January 2020, the Catavencii publication wrote that the director of SERA Romania has been Bogdan Simion for many years. In 2015, Bogdan Simion was the first variant of Dacian Cioloș for the post of Minister of Labor and Social Protection.