Today we publish the Congolese NGO Dynamique de lutte contre le trafic humain (DCTH)  about illegal adoption and trafficking of human beings, true crimes in silence. It’s in French. In short, it calls for justice for all, and an end to the silence.
And for action at the level of the European Parliament and the European Commission.

We publish this report, with their agreement, because this new human rights organisation has not yet a website. 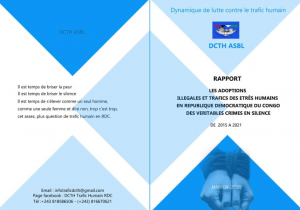 We remind that in 2010, German TV showed how Roelie Post explains the intercountry adoption system – based on the lessons learned from Romania and predicts the upcoming adoption scandal in Congo.

See below’s link to ACT’s chronology, which shows the international connivance with child trafficking for adoption: The US, France, Italy, Netherlands, Belgium, Spain.
But also the European Parliament, the EU Delegation in Congo.

In Belgium a courtcase is ongoing about three stolen children from Congo. One of the children was adopted by a civil servant of the European Commission. A colleague of Roelie Post, so to say. She contacted ACT some years ago, for assistance.
The world upside down, we referred the case back to her employer. 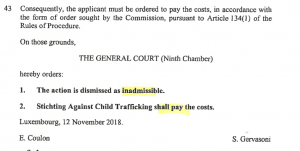