The Danish government may be preparing the silent dead of intercountry adoptions. Not surprisingly, considering the nightmares it brought the last decade or so.

It was in 1999 when Denmark, got woken up to the trafficking of children for intercountry adoption. The Hague Adoption Convention, which was meant to prevent the trafficking/sale of children, got implemented in Romania. Things did not go well. After a TV reporting, the Minister ordered Terre des Hommes Denmark to stop adoptions from Romania, because of scams with medical declarations and social reports.

Denmark then joined the European agencies and the International Social Services’ attempt to get the Romanian authorities to put some order in the adoption system. That attempt failed. The European Union stepped in. To get out of the adoption lobby’s claims that intercountry adoption should remain part of Romania’s child protection system, the European Commission set up an Independent Panel of Child Rights Experts. That Panel ruled that (intercountry) should not be considered child protection. In line with the UN Convention on the Rights of the Child, intercountry adoption may only be allowed if there is no other way to care for the child. Such care includes foster and residential care.

Around that time Katja Vesselbo contacted Against Child Trafficking (Arun Dohle) about making a documentary on trafficking and adoption in India. Arun had since long worked on unveiling the patterns and details of this business. An intense cooperation resulted in A Babybusiness brought an Indian father on the Danish TV screens. A father searching for his stolen children.

Katja Vesselbo also wrote a fictional book about it: Other People’s Children.

ACT continues to support the father in regaining some relationship with his children.

The movie Mercy Mercy shook the adoption land end 2012. ACT took up the case and helped Masho’s Ethiopian parents to undo the adoption in Ethiopia. Arun Dohle visited Ethiopia several times. Unfortunately, despite many efforts, no contact with their daughters could be made.

In the sideline of this, the case of Amy got into the news through the work of Journalist Dorrit Saietz.

ACT bent over backward to help Amy. And Amy put a bomb under the Danish adoption system. We helped her mother to undo the adoption in Ethiopia.

A movie was later made about it: Girl in Return.

Dorrit Saietz wrote a book about the Adoption Battlefields

Denmark tried to regain control. To improve the system. The remaining two agencies were merged into a new agency: Danish International Adoption (DIA). Scandals continued, however, latest the adoption from Kenya.

The Danish authorities, just like the Dutch, held consultations, prepared documents with possible options on how to continue the adoption system. How to do it better.
Their main adviser: International Social Services. Of the three options given, Denmark now seems to go for option 3: for state-level, no adoption agencies.

This is how Australia operates, without agencies. It has been proven not to prevent illicit practices/child trafficking.

Why not? Well, it is not how you organise your adoption system that protects children. It is how you apply child rights. To be precise, which children ‘qualify’ for intercountry adoptions.

As we know, there are two conflicting Conventions. The UN Convention on the Rights and the Hague Adoption Convention.

The Danish authorities in 2007 found it hard to believe that the EU was opting for the UN Convention on the Rights of the Child. They asked their Foreign Affairs Minister to check with ‘Brussels’, see letter

and they got a clear reply: 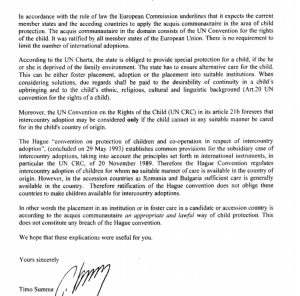 Obtained via a request for access to documents, available here ASK the EU

Since we know that sometimes administrations have a poor institutional memory, Arun Dohle handed over a copy of the exchange of letters to the Danish Minister beginning of this year during a consultation of stateholders: 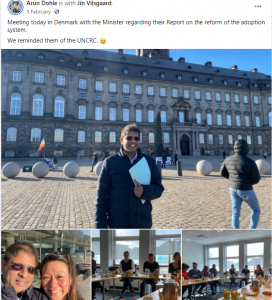 If one sticks to the subsidiarity rule of the UNCRC, there will be hardly any intercountry adoptions, if at all.

Here the Danish article of yesterday:

The government is considering making international adoption state-level: It could hit gays and singles

Politiken has come into possession of internal notes from the Ministry of Social Affairs and the Interior, which show that Astrid Krag is considering a state model for international adoption. Parties fear the consequences.

On the negotiating table between the parliamentary parties, there is a consideration that the dissemination of international adoption should be moved to the National Board of Appeal, which is under the Ministry of Social Affairs and the Interior.

This appears from internal documents that Politiken has into possession.

At present, the non-governmental organization Danish International Adoption (DIA) is responsible for the placement of children for international adoption in Denmark.

The internal documents state that a state handling of international adoption will lead to a reduction in the number of partners from abroad, as they either cannot or do not want to cooperate with the state on adoption.

‘The four countries that are not expected to continue cooperating with a state actor are South Africa, South Korea, Taiwan and Burkino Faso. It is not the intention that the number of partner countries is subsequently sought to be expanded,’ the documents state.

Precisely for this reason, the consideration meets with criticism from several sides. Because, as the internal documents show, a reduction in partner countries may mean that certain groups of applicants cannot adopt internationally.

According to Michael Paaske, chairman of Adoption og Samfund [Adoption and Society], the National Association for Adopted and Relatives, it will especially affect gay couples and singles.

“If the mediation for international adoption comes under the state, and South Africa, therefore, stops cooperating with Denmark, gay couples in Denmark will no longer have the opportunity to adopt, as South Africa is the only country that allows adoption to homosexuals,” he says.

A state model also meets with criticism from several parties at Christiansborg. The Liberal Party’s social rapporteur, Marie Bjerre, says it is incomprehensible and they cannot support a state transition for several reasons:

“We do not believe that a state model will make it better or cheaper. This will mean a significant decrease in the number of international adoptions. And it would be sad if gay couples and single people no longer had the option of adoption. ”

“We are concerned that nationalization will mean that up to half of the international adoptions will lapse. But there are children in the world who need to be adopted into a family. Therefore, we think it is obvious that we from the Danish side provide good opportunities for them to be adopted here, “she says and continues:

“If we actively choose a model where we cut a lot of adoptions off, we will create a larger market for commercial surrogacy mothers in other countries because some families will go to great lengths to have a family and therefore use that opportunity.”

“There is also a risk of a temporary complete or partial cessation of international adoption in a transitional phase.”