Susan Jacobs: I think there were voices in the European Union against international adoptions. 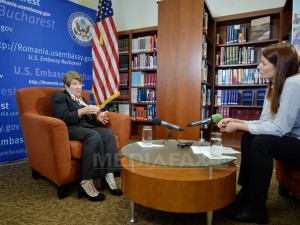 Video Interview – Ambassador Susan Jacobs: It would be reasonable to open Romanian international adoption for children with special needs

It would be reasonable for Romania to reopen international adoptions for children who can not find a home, those with special needs, higher age or more siblings, says US Ambassador Susan Jacobs, Special Advisor for childrens issues, in an interview for MEDIAFAX.

Ambassador Susan Jacobs, who has lived in Romania between 1995-1997, returned to Bucharest for talks with Romanian officials about the possibility of reopening international adoptions. She met with government officials dealing with child issues, but also with representatives of NGOs in the field.

Susan Jacobs believes that solutions should be found for those children who can not find an adoptive family in Romania and said that it would be logical to use the same criteria as adoptions in their country to find them suitable families internationally. According to Ambassador Susan Jacobs, this would enable the children to live in a family, to have the love of a permanent home.

Special adviser on children’s issues, of the Department of State, says that of the 5,000 children adopted in Romania, 500 could be adopted internationally if the procedure should be reopened because, under current conditions, „very few families would meet the Romanian State’s criteria for international adoption“.

Reporter: The United States opposed the ban on international adoptions in Romania, ever since that law was in force since 2005. How do you explain this interest from the United States to adopt children from Romania.

Susan Jacobs: It’s a very interesting question, thank you for it. I believe that many Americans are interested in adoptions from all over the world. Incidentally, in the last 20 years, Americans adopted 250,000 children from all countries, and Romania is one of the states where the Americans used to take and I think they would be interested in doing so again.

Susan Jacobs: From the discussions I have had with officials from Romania, there are about 5,000 children adoptable at this moment. From a total of 58,000 children in some form of special protection, it is a small number. Of those 5,000, only 500 are taken outside the country, but there are very few families who would meet the Romanian State’s criteria for international adoption. The problem is that many children leave foster care when they could find a permanent home.

Reporter: What do you think Romania should in this respect?

Susan Jacobs: Romania got very far compared to the period in which I lived here between 1995-1997. I believe that Romania has given some very good laws meanwhile, has clearly established some procedures to protect children, but in almost every country we find children who can not find a home in their own country and I think it would be logical to use the same serious criteria are used adoptions in Romania to find families for them internationally. This would enable these children to live in families.

Reporter: The main reason children are abandoned in Romania is poverty. Do you think the opening of international adoption would be detrimental to efforts to support families to raise their own children?

Susan Jacobs: I think it is very important for governments to support the family. I believe that a child is the best within its family and I think every government has a responsibility to its citizens to protect children and their families. But as I said, sometimes it is not possible sometimes parents die, the children have no other living relatives. Studies have shown that children who grow up in orphanages do not develop like those living in a family. So it is very important for governments to help children find a family. It’s about taking a child and you find the best family in order to have a loving and permanent home.

Reporter: Officially, Romania has blocked international adoptions to prevent child trafficking. Do you think that there were other reasons that led to this decision?

Susan Jacobs: I think probably there are several reasons why a country takes such a decision, I think, on the one hand, considers that there is abuse in the system somewhere. Romania has greatly strengthened the system, strengthened child protection measures that help to protect them and keep them safe. All officials could regulate international adoptions, and we work with them in this chapter, to find the best homes for these children. I think it can always be the concern for a child, that it could be abused. For example, we in the United States prior to allowing a family to adopt a child, do a thorough check of parenthood, the home you have, check their background and only then they are given permission to adopt a child living in another country.

Reporter: Since when were partially open international adoptions in 2012, there have been few such adoptions. What should Romania, which would be the solution to have a better monitoring of children after they have been adopted in other countries?

Susan Jacobs: It’s a great question. The United States does adoptions through adoption service providers, adoption agencies. Romania should accredit them to work in Romania and the rules as laid down by officials here. For example, if Romania could require these agencies accredited certain monitoring reports after the adoption was finalized. Romania may request these reports from agencies, and they should provide all the data, and if it were not so, Romania might forbid them to operate here. Now, the United States, each agency is accredited and meets the standards Hague Hague Convention. Romania and the United States are partner countries to the Hague Convention and, because of that, there are all well-established regulations for international adoptions. But every country regulates the adoption and Romania would decide whether to open further international adoptions could establish clear rules, and if they are not met, then adoption would take place.

Susan Jacobs: No, these are two unrelated topics. One is about national security, the other about the welfare of children, so they are two very different topics. I think the US wants only the good for this country, to be prosperous, secure, and we want all children in Romania to find a permanent, loving families.

Reporter: What do you recommend Romania as regards legislation to change the fate of these children?

Susan Jacobs: I think it is reasonable to open up adoptions for children who can have a a hard time finding permanency and cannot not find a home for people with special needs who are older or in cases where there are many brothers. If the procedure should be opened for these children, I think it would help a lot. They could go from orphanages and have a better chance at a good life, prosperous and loving.

Reporter there are others who said that adoption legislation is very bushy and that there were many families who gave up on the way, because of this. What would be your recommendation in this regard?

Susan Jacobs: In our discussions with government officials there have made some proposals that would make the process more efficient and faster. I think it is very important that children leave institutions as demonstrated by a study Bucharest Early Intervention Project (BEIP), which has followed for 16 years, children who lived in institutions and children who lived families. The differences in brain development is enormous and shows that children in foster care are not developing as fast and pace, and their emotional development would be totally different if reared in a family. The key word is „family“, where a child is in a family, but each country must decide which is the best way they can do that. In general, the best way is for them to be moved quickly out of the institutional system. To work with family intervention in helping families to raise and, if you can not, then the state must find another family that can do this in the shortest possible time.

Susan Jacobs: I think there were voices in the European Union against international adoptions. I also know that there are countries that do adoptions, Romania’s neighbours, for example. I think it is an individual issue, I think that every country, no matter of which Pact or Union, must decide which is the best thing for their children. This is what the Hague Convention is about, how we respect the child’s interest. And the child’s interest is to be in a family.