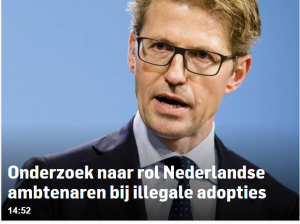 An independent committee will investigate abuses in adoptions of foreign children by the Dutch, and the possible involvement of the government in this. The Ministry of Justice and Security has just announced this.

Political editing 06-12-18, 14:12 Last update: 14:25
Dutch officials may have been involved in illegal adoptions from Brazil in the past, according to the ministry. In addition, attempts may have been made to ‚disregard this involvement in criminal investigations‘, writes Minister Sander Dekker (Legal Protection). He wants to know if this occurred more often, and to what extent the government played an active role in illegal adoptions.

The information about the possible involvement came to light through an information request based on the Government Information (Public Access) Act (Wob). ‚The most important research question is what the actual course of events was and what the role of the Dutch government was,‘ says Dekker.

Abuses
The committee will cast its net broadly: the research focuses on adoptions from Bangladesh, Brazil, Colombia, Indonesia and Sri Lanka, in the period from 1967 to 1998, ’starting with Brazil‘. About these countries ‚people involved‘ have pointed out to the ministry possible abuses.

Research program Zembla spent earlier this year on attention to abuses in adoptions from Sri Lanka. In response to the broadcast, Dekker said that the ‚primary responsibility‘ for a careful adoption procedure was ‚and lies with the sending countries‘.

But on the basis of the new information, Dekker now sees reason to take a close look at the actions of the Dutch government.