For around 300 families that lost their children, there is however little to celebrate.
Geetika Mantri
Wednesday, June 19, 2019 – 08:05 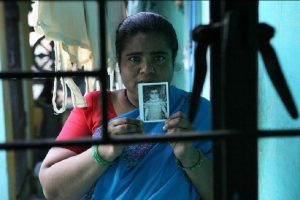 Fathima holding up a photo up her daughter, Jabin

“Have you heard from my daughter? What did she say? It makes me happy to hear from her,” a hopeful Fathima tells me over the phone. When I tell her that I haven’t spoken to her, her voice immediately deflates. “Okay,” says the Chennai-based mother of four, now nearing 50. “Please do something madam. I want to see her. When I think of her, I just want to cry.”

In November 1998, Saida Banu, nicknamed Jabin by her parents, Fathima and Salia, was just three-and-a-half years old. Jabin was cruelly snatched from her family – kidnapped by Malaysian Social Services (MSS), an orphanage that then illegally facilitated her adoption to a couple living in Australia, in 2000. Over two decades after Jabin and – according to estimates – over 300 other children suffered a similar fate at MSS’s hands, a Chennai court convicted MSS in relation to the illegal inter-country adoptions.

An Additional Chief Metropolitan Magistrate Court in Egmore, Chennai on February 12, 2019, said that MSS had to pay a fine of Rs 10,000 under section 420 (cheating) of the IPC. Among the accused persons, the maximum punishment awarded was just one year. However, ironically, the main accused in the case, who plotted the kidnapping and illegal adoption, PV Ravindranath the chairperson of MSS, died a few years ago.

Arun Dohle, co-founder of Against Child Trafficking (ACT), an NGO which has fighting against child trafficking through illegal inter-country adoptions, told TNM that this judgment confirms what the media had been saying about children from economically backward families being kidnapped to be adopted overseas. “The media stories were accurate, and Dutch, US, Australian Authorities have failed big time.”

However, there is no respite for the families who want to see their children who were snatched away. “The punishments are minimal and show how unjust the law is,” Arun states. “This judgment doesn’t do anything – neither for the affected families, nor for the adopted children.”

Speaking to TNM, Saddam, one of Jabin’s three siblings reveals that the last he spoke to his sister, Jabin, was in 2014. Jabin, or Sundari, as she was renamed by MSS, would be in her 20s now. Jabin’s adoptive parents cut off her contact with her biological family. Once, when Saddam tried to contact her on social media, she said she did not like Chennai and told him not to contact her again before blocking him. “My mother is sick now… she has high BP and high sugar. All she wants to do is see her daughter once…” Saddam trails off. 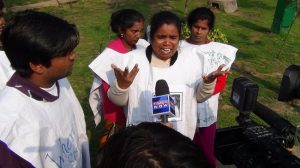 Fathima at a protest in Delhi in 2013

Another family that became a victim of MSS’s illegal activities was that of Nagarani’s. In March 1999, Nagarani and her husband Kathiravel, a coolie, residents of Chennai’s Pulainthope Colony, were sleeping outside their hut as they had no electricity. When they awoke, they were horrified to find their one-and-half-year-old son, Satheesh, missing – like Jabin, he too had been kidnapped. After years of investigation by the CBI, in 2005, Satheesh was traced to adoptive parents in the Netherlands. By then, Satheesh had been renamed Rohit by his adoptive parents.

In 2010, with ACT’s help, Nagarani and Kathiravel traveled to the Netherlands to prove with a DNA test that Rohit was indeed their son. However, they were denied the same by a Dutch family court which said it would risk emotional trauma to the minor child. Nagarani also has a case ongoing in the Madras High Court seeking to meet her son. 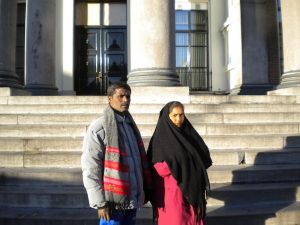 Kathiravel and Nagarani at a Dutch court

Last year, the Madras High Court responded affirmatively to a February 2016 writ petition asking for Rs 3 lakh compensation for Nagarani, and ordered interim compensation of Rs 1 lakh to be given to her last year. The writ petition was filed by Madras High Court advocate Selvi, who tells TNM that now the DGP’s office is delaying the payment at a time when Nagarani’s family is in deep financial crisis.

Sujata Mody, National Secretary of New Trade Union Initiative, who has been in touch with Nagarani, argues that the judgment should have made sure that she can meet her son at least once on costs borne by the Indian and Dutch governments.

“After she lost the child, her family was never complete. When you lose a child to death, at least there is closure. Whenever we met them, even 5-10 years after the kidnapping, they would still talk about the pain of searching for Satheesh. Her husband would go everywhere – in bus, roads etc. and if he saw a child who looked like him, he’d be reminded of Satheesh. The court has not recognised their emotional, psychological injuries,” Sujata says.

“The state failed them,” says Selvi. “They should have been given proper lawyers and counsel from the very beginning. The CBI has also put forward a watertight case.” “Had action been taken in 1-2 years, Nagarani could have asked for Satheesh to be reunited with her family,” Sujata adds.

Both Selvi and Sujata say that the institutional apathy has to do with Nagarani and her family’s poor background. “Had it been a chit fund scam that affected the middle class, the response would have been very different,” Selvi says. She adds that the state should appeal this verdict, and ask for a harsher sentence for the accused.

Saddam, who earns a living selling mutton, agrees. “The people who took Jabin away… they should have been punished more.”

The crimes of MSS

The judgment reveals the many ways in which MSS broke families and caused unimaginable trauma to poor couples; how they hoodwinked CARA, the agency responsible to oversee adoptions in India; and how they earned big bucks by forging numerous documents to change the identities of the kidnapped children and to bypass laws and guidelines to facilitate inter-country adoptions that earned them tens of lakhs.

The modus operandi involved kidnapping young children from disadvantaged households and forging a surrender deed from a fictional person as the mother of the kidnapped child. They would then forge a fake rejection letter from Indian couples for these children. This is because according to the Supreme Court’s guidelines, priority must be given to get these children adopted within India. Using this forged letter, they would obtain orders from the Madras High Court to place these children in the ‘foster care’ of foreign couples. In all the cases highlighted in the chargesheet, MSS received significant amount of money from the overseas adoptive parents of the children once the adoption went through.

In some cases, they also tried to pass off two unrelated children as siblings, because it allowed them to bypass registering children with the Voluntary Coordinating Agency (VCA), which was set up by the Supreme Court to scrutinize inter-country adoption.

“In the case of Suji and Sundari and in some more cases, they were presented as siblings born to a single mother and avoided registering with VCA by using just one clause 425 of Cara guidelines which says exemption may be given from registering with VCA for children much older in age, or children with disability or siblings,” the judgment notes.

Suji was a 15-day-old infant and Sundari, was actually Fathima’s kidnapped daughter, Jabin. 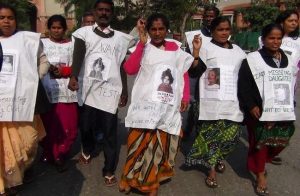 Nagarani (centre, in the pink blouse) protests along with other families who were affected by MSS at Delhi in 2013 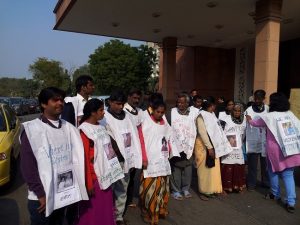 Families of children who were kidnapped by MSS protest at the International CARA Conference, Delhi (2013)

While the late PV Ravindranath was the chairperson of MSS, Somu was the one who forged the signatures on the surrender deeds. The other accused – Dawood and Navjeen – had kidnapped several children and sold them to MSS. They were assisted by Saleema, Sabeera, and P Manoharan. Vatsala, who was also a chairperson of the MSS, was acquitted because the court said that Ravindranath only signed the documents in front of her. Her presence was not enough to prove that she committed the offences, the court held.

Further, in 2001, a joint investigation by Central Adoption Resource Authority (CARA) and the Tamil Nadu government into MSS found several irregularities. “Number of irregularities were found. (1) the surrender documents were not proper, (2) more children were placed for foreign adoption, (3) there was violation of grant in scheme mean for children homes (Shishu Greh Scheme), (4) improper documentation was made and (5) Malaysian Social services Chennai was running as a family business,” the judgment says.

After this, recognition of MSS to conduct inter-country adoptions was withdrawn. They also stopped the grants.

Apart from Jabin and Satheesh, another case highlighted by the CBI was that of Nageshwar Rao and Sivagami, whose son, Subhash, was kidnapped by MSS. “Malaysian Social Services prepared a forged surrender deed as of one H Noorjahan [who] surrendered one male child called Ashraf reportedly born to her on 12.10.1996 at Kancheepuram out of wedlock. Somasundaram forged the signature Noorjahan,” the judgment notes. And while Nageshwar Rao was able to get a positive DNA test to prove his paternity, he too has been unable to meet his son, who was adopted by a couple in the US.

“There is little clarity on how many more children have been kidnapped. The governments of the countries of the children’s origin ought to start a broader criminal investigation into adoptions by MSS and other Indian orphanages,” Arun says.

(With inputs from Anjana Shekar)