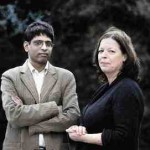 On the wall of their office in Brussels is a large world map with green, red and blue dots. Green for the ‚open‘ adoption countries, red for the countries that closed the doors. And blue ones representing the regions which Roelie Post (49) and Arun Dohle (36) have so far examined: Malawi, Ethiopia, China, Peru and India.

Their goal is a „red world“: five years from now inter-country adoptions should have been stopped. According to them, it is „legalized trade of children”, where vulnerable children are exchanged for large sums of money. Their description of adoption has, John Le Carré-like features: stolen babies, unscrupulous traders, cheating orphanage directors and forged adoption procedures. This is, as they say, the rule.

To make this „commerce“ visible and to frustrate it, Post and Dohle, together founded Against Child Trafficking (ACT). In their office, located in Post’s basement, the two make long days: „And often the phone rings here at three at night”.

Although trafficked children enter Australia under legal adoption procedures, we would invite you to consider the Australian authorities‘ liability in adoption cases of kidnapped children where available information was willfully ignored…